Where can you take a train to Tibet is one of the frequently asked questions for many foreign tourists who plan to have a lifetime Tibet train tour in China. So far, there are nine major cities in China that offer the train to Lhasa, including Beijing, Shanghai, Guangzhou, Chengdu, Chongqing, Wuhan, Xi’an, Xining, and Lanzhou. Among them, only Beijing, Shanghai, Guangzhou, Chengdu, Chongqing and Xining are the departure stations and others are stops of those lines. Keep reading and you will get a quick review of those trains to Lhasa and have a check on those Tibet train maps.

Thanks to the Qinghai-Tibet Railway, trains from major cities of China can get to Lhasa from July 2006. It is the longest and the highest railway built on high-altitude area in the world. But it plays a crucial role in connecting inland China and Tibet. This 1956km-long railway greatly boosts the development of Tibet tourism and makes it easier for people to travel to this magical land from the day it started its service. At Tanggula Pass, this railway reaches its highest altitude of 5,072 meters above sea level. There are total seven stops along the railway, which includes Xining Train Station, Delingha Train Station, Golmud Train Station, Amdo Train Station, Nagqu Train Station, Damxung Train Station, and the last Lhasa Train Station. 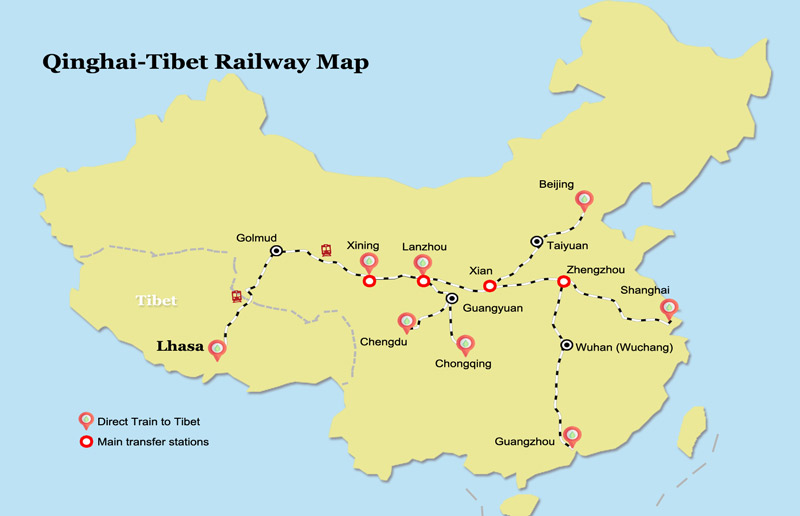 As the capital of China, Beijing is always considered as the most popular gateway to Tibet by trains. The train from Beijing to Lhasa will pass through six provinces of China and the scenery along the road will keep varying since it will take you from the northeast to the southwest of China.

Train Z21 departs at Beijing Railway Station in the evening and arrives at Lhasa Railway Station on day three. The total train trip will cost 40 hours and 40 minutes. Train Z22 will take you back to Beijing from Lhasa at 15:50 and it will arrive in Beijing in the morning on the third day after 40 hours and 38 minutes on the road. 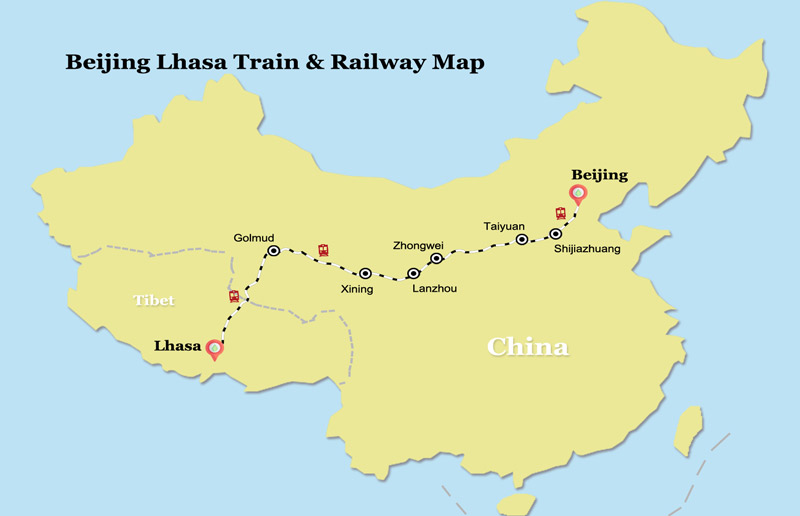 Train Z164 is the train that starts from Shanghai to Lhasa every day. It is also the mos taken train route for most tourists since Shanghai is one of the most popular destinations in China. This train trip will take you to pass through six provinces in China, stretching about 4,373 kilometers from the southeast to the southwest of China.

Train Z164 and Z166 is the pair of trains that connect Shanghai and Lhasa. The whole train trip will take about 48 hours on the road. It will pass through Jiangsu, Anhui, Henan, Shaanxi, Gansu, and Qinghai. And it has total 14 stops on the road, including Suzhou, Wuxi, Nanjing, Bengbu, Xuzhou, Zhengzhou, Xi’an, Xianyang, Lanzhou, Xining, Delingha, Golmud, Amdo and Nagqu. 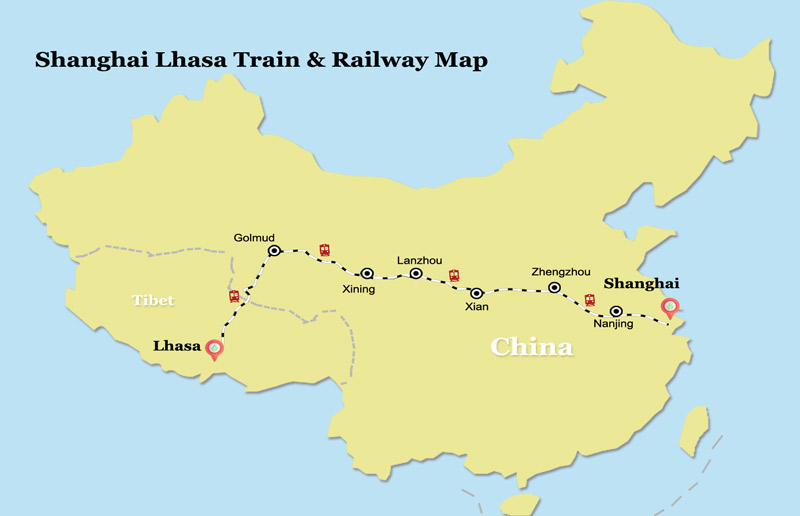 Guangzhou to Lhasa is the longest train route in China since it will spend more than 50 hours to get to Tibet. It is less popular than other trains to Lhasa, but it remains a necessary railway in China because it will stop at Wuchang Railway Station and Xi’an Railway Station. With the train from Guangzhou to Lhasa, these two popular tourist destinations in China can also convey tourists to Tibet.

Train Z264 and Z266 runs every other day currently, covering a distance of 4,980 kilometers. The whole trip is the longest among other trains to Lhasa, which will cost about 53 hours. Except for the departure station and the terminal station, this line has 11 stop stations. It will stop at Chenzhou, Changsha, Wuchang, Zhengzhou, Xi’an, Lanzhou, Xining, Delingha, Golmud, Amdo and Nagqu. 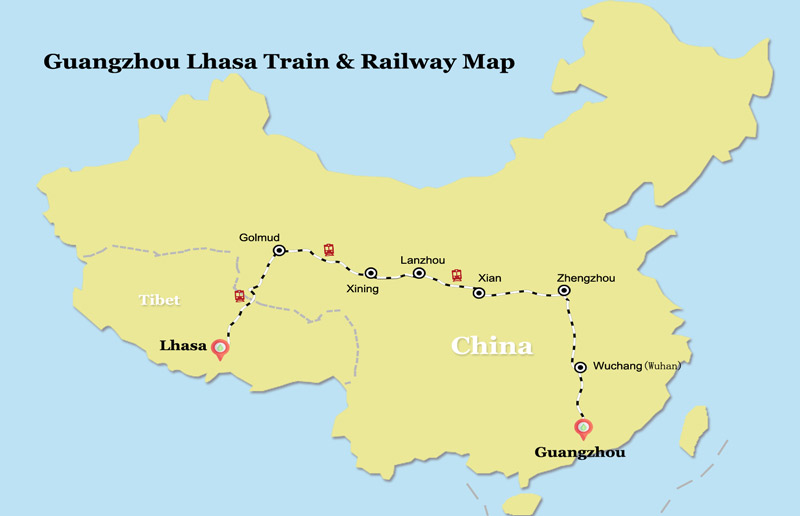 Chengdu is definitely the most popular gateway for tourists who want to get to Tibet by train. As the homeland of the giant panda, Chengdu can attract thousands of tourists every year and train Z322 will take tourists to Tibet directly.

Chengdu is close to Tibet geologically, train from Chengdu to Lhasa will only pass through three provinces. The major stops on the road include Guangyuan, Lanzhou, Xining, Delingha, Golmud, and Nagqu. 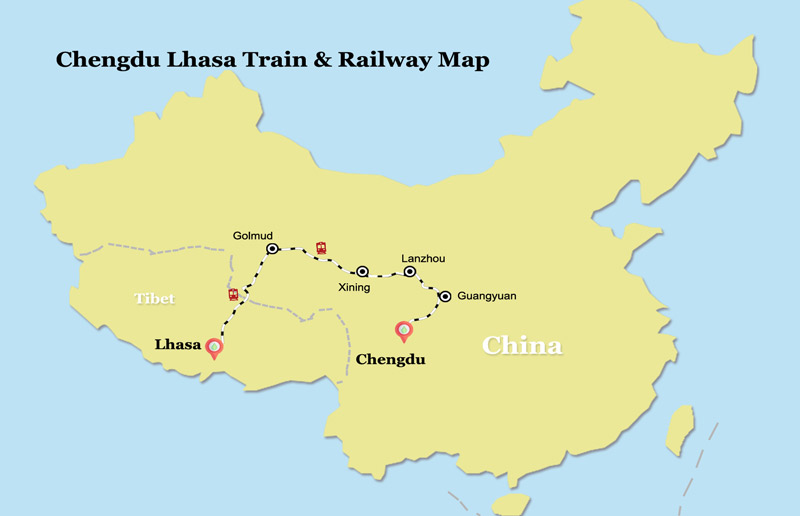 Train from Chongqing to Lhasa covers 3,030 kilometers and will only take about 35 hours to get to Tibet. Over these years, Chongqing has become one of the most popular tourist destinations in China due to its unique terrains, delicious food and hospitality of its local people.

Train Z223 runs from Chongqing to Lhasa every other day. Its departure time at Chongqing West Railway Station is 22:25 and it arrives at Lhasa Railway Station on the third day at 09:56 after a 35.5-hour train trip. Train Z224 departs at Lhasa at 18:40 and finally stops at Chongqing at 06:42 on day three. The whole journey will take 36 hours and 2 minutes.

Train from Chongqing to Lhasa will pass through Sichuan Province, Gansu and Qinghai. It will make stops at North Nanchong Railway Station, Guangyuan, Lanzhou, Xining, Delingha, Golmud, and Nagqu. 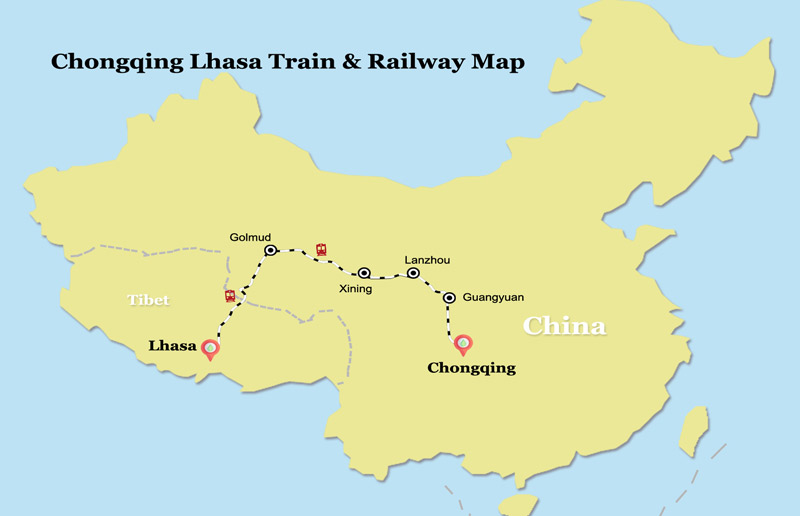 Xining is the first stop of the Qinghai-Tibet Railway, which makes it the most important stop of all trains to Tibet. From Xining to Lhasa, tourists will get the chance to enjoy the most amazing scenery on Tibet Plateau.

As the departure station, Xining has four trains to get to Lhasa. Train Z6801, Z6811 and Z9808 run every day, while Train Z9817 runs every other day. All of them will take about 20 hours on the road. And trains from other major cities of China will all make a stop at Xining Railway Station. The major stops on Xining to Lhasa railway are Delingha, Golmud, Amdo and Nagqu. 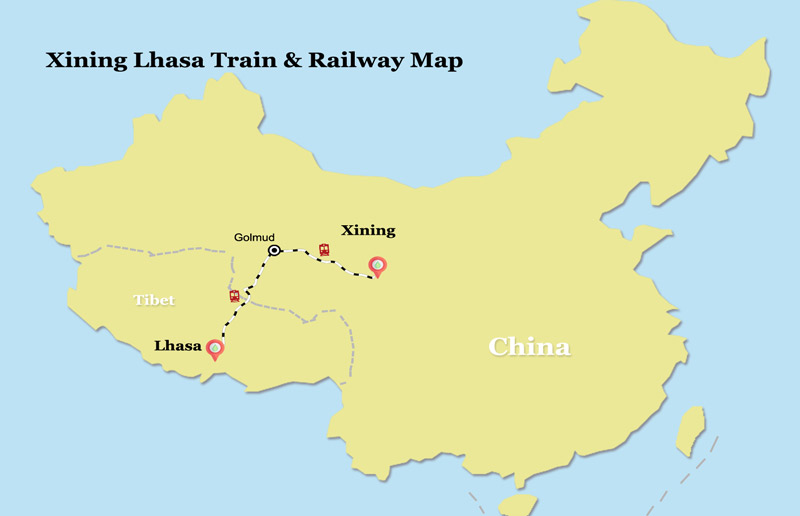 Train Z165 from Shanghai will depart Xi’an Railway Station and continues another 32.23 hours to arrive at Lhasa on the second day. It will stop at Xianyang, Lanzhou, Xining, Delingha, Golmud, Amdo and Nagqu.

Train Z265 from Guangzhou leaves Xi’an at 09:54 and arrives at Lhasa at 16:46 on the second day. It takes 30 hours and 52 minutes from Xi’an to Lhasa and makes a stop at Lanzhou, Xining, Delingha, Golmud, Amdo and Nagqu. 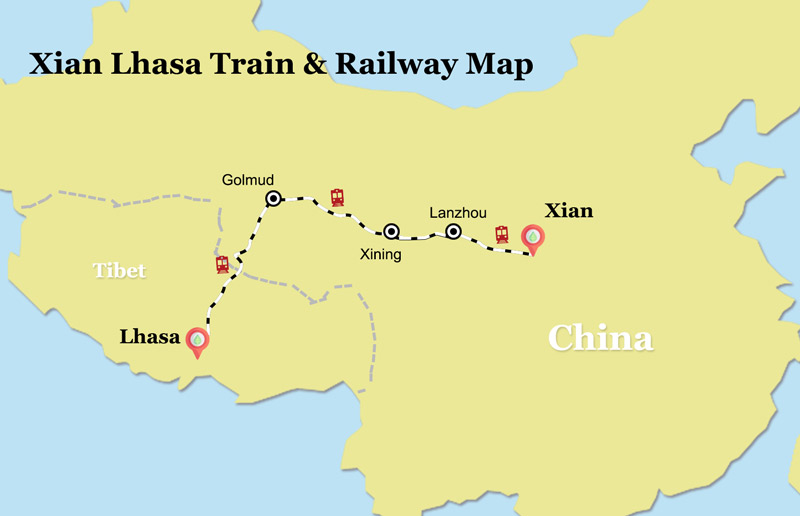 Train Z264 from Guangzhou to Lhasa and Train Z266 from Lhasa to Guangzhou will take tourists to Lhasa at Wuchang Railway Station. The journey is about 43 hours. All the stops along the road from Wuchang to Lhasa are Zhengzhou, Xi’an, Lanzhou, Xining, Delingha, Golmud, Amdo and Nagqu. 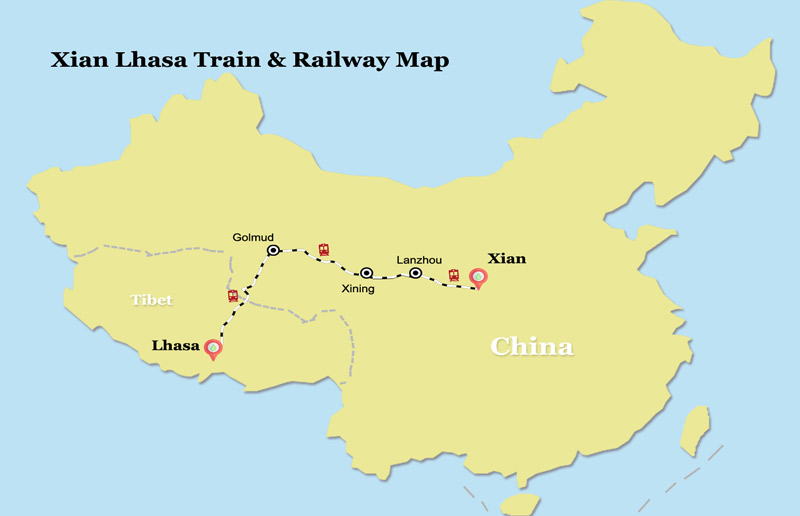 All trains from Beijing, Shanghai, Guangzhou, Chengdu and Chongqing will pass through Lanzhou. So, tourists can get a ticket to Tibet at Lanzhou Railway Station easily. The railway from Lanzhou to Lhasa covers 2,188 kilometers and the total journey will take about 23 hours. It starts in Guansu and passes through Qinghai to reach Tibet. Stops along the road include Xining, Delingha, Golmud, Amdo and Nagqu. 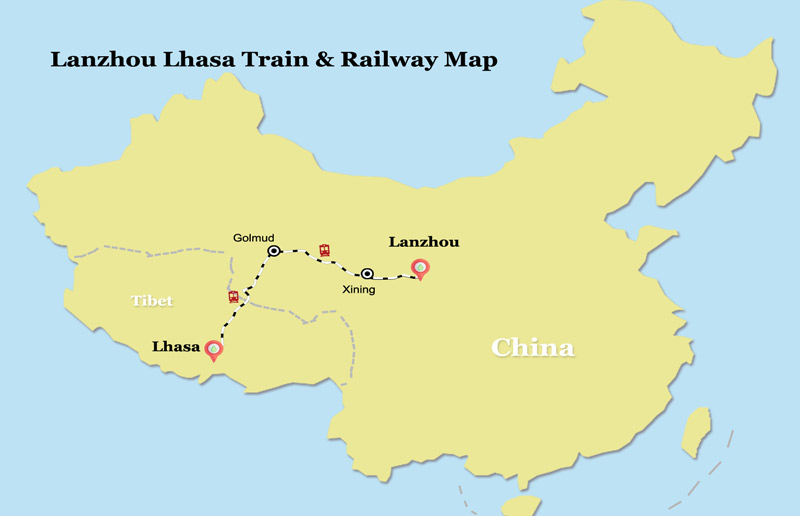 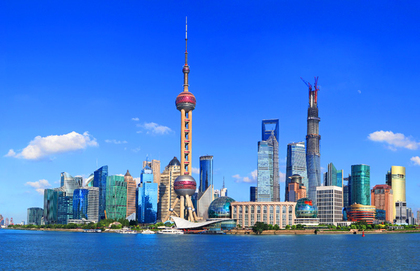 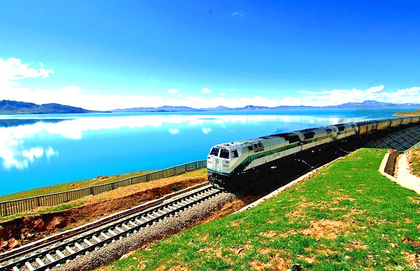 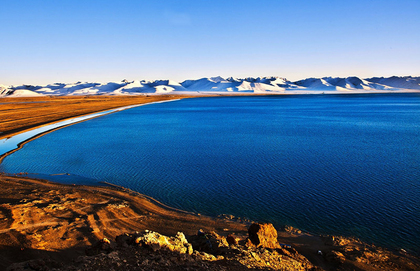 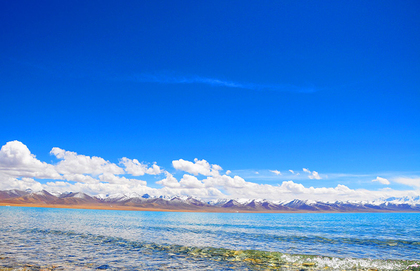 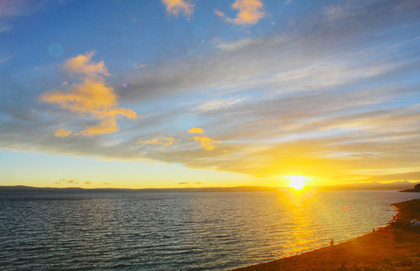 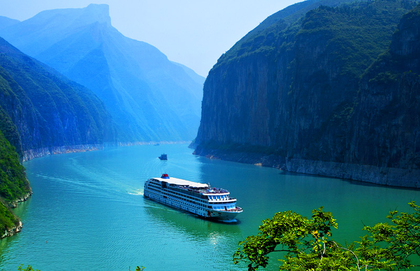