Guangzhou is a city that has so many to offer to its tourists. Everyone will be indulged in the charm and beauty of this city once they are traveling here. And Guangzhou is also the departure city in mainland China that runs a train to Tibet. For tourists who wish to have a memorable Tibet train tour, it is possible for them to purchase a Tibet train ticket and board the train to Lhasa.

Guangzhou to Lhasa Train is the longest train route among those Tibet trains, which will take 52 hours and 5 minutes on that road. Except for Guangzhou Train Station and Lhasa Train Station, the whole journey has other 11 stops along the road, covering a distance of 4.980 kilometers. It runs daily, which makes it relatively easy to purchase a train ticket to get to Lhasa. However, tourists need to be well prepared during the peak season of Tibet tourism since the train tickets can also be sold out quickly. 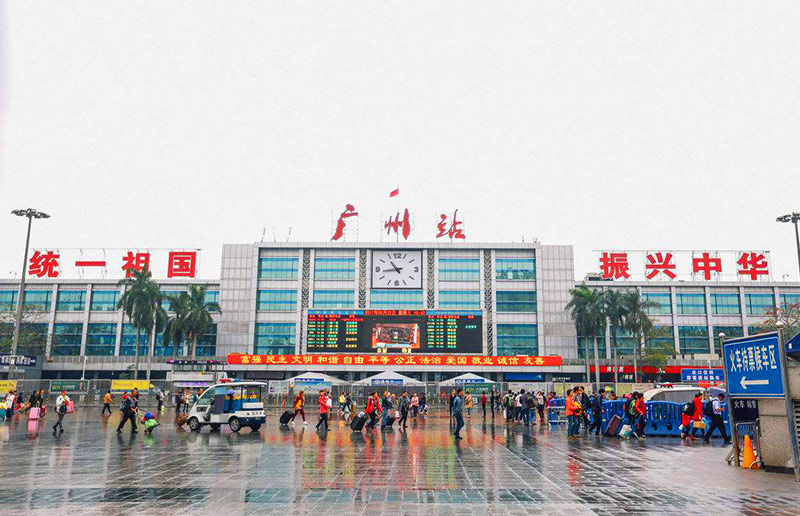 How to Get to Guangzhou Train Station?

Guangzhou has five train stations. But only Guangzhou Train Station serves as the departure station of Guangzhou Lhasa Train, which is located at No.159, Huanshi West Road, Yuexiu District. It can be reached easily from downtown Guangzhou or from Baiyun International Airport.

If you are in Guangzhou downtown, you can take Metro Line 2 and Line 5 to get to Guangzhou Train Station directly. Besides, you can also take other metro lines and transfer to Metro Line 2 and Line 5. In the near future, Metro Line 11, Line 14, and Line 22 connect Guangzhou Train Station with this city. As for bus lines, it is easy for tourists to take a bus in Guangzhou City to get to the train station since there are numerous bus lines that will stop there. Tourists can pick bus No.30, 31, 52, 180, 210, etc. If you are not familiar with this city, you’d better to pack your bags and leave for the train station in advance to avoid missing your train to Lhasa.

From Baiyun International Airport, tourists can take Metro Line 3 to get to Jiahewanggang Station and transfer to Line 2. It is the quickest and the most convenient way for tourists to get to Guangzhou Train Station from Baiyun International Airport, which will only take about 44 minutes. Of course, there are other ways for tourists to travel from the airport to the train station. But we will not recommend other routes because they are time-consuming and not convenient. However, tourists can also choose to take a taxi at Baiyun Airport to get to Guangzhou Train Station, which will cost about CNY100. 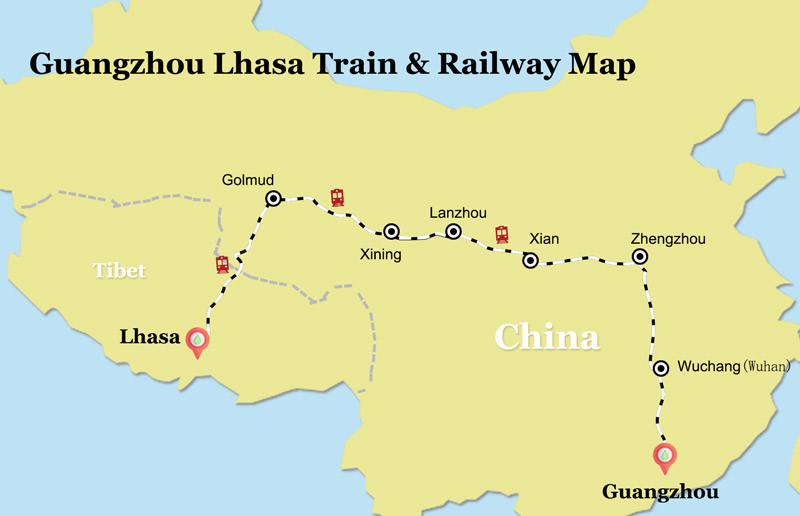 Alternatives for Tourists to Choose

A 53-hour Tibet train tour will possibly make tourists bored and exhausted sooner or later. If you insist on having a train tour to Tibet, we highly suggest that you take a flight to other cities that also run Tibet trains. Xining will be the best option for you to choose since Xining is the starting point of Qinghai-Tibet Railway. So, you will not miss the amazing scenery that you want to enjoy by taking a train to Lhasa from Xining. If you want to make a transfer in Chengdu, Chongqing or Lanzhou, you can also enjoy a great tour to Tibet on the train. Flight tickets are available from Guangzhou to those cities.

How to Book a Guangzhou Lhasa Train Ticket?

In China, tourists can book a train ticket online or at the railway station. Since Tibet train tickets are difficult to book for recent dates, foreign tourists can only book the train tickets online or via a travel agency. www.12306.cn is available for tourists to check with an English version. What you need is your passport number and a phone number that registered in mainland China. So, most tourists will get stuck at this step since they may not have a phone number for them to register. But it is easy to find some Tibet travel agencies like us, which offer train ticket booking services to tourists. All you have to do is sending us your passport number and the dates you wish to take the train. And then we will try our best to book a train ticket to Lhasa for you. We will keep in touch. Before you arrive in China, we will send your train tickets to your hotel. Or, we will send people to the train station to wait for you before the departure time. You will definitely get your train ticket before going into the train station.