Shoton Festival is a traditional Tibetan Festival holden at the end of June or the beginning of July in Tibetan calendar. In Tibetan, "Sho" means yoghurt, and "Ton" means "eat and feast". According to Tibetan interpretation, Shoton Festival is a festival to eat yoghurt, so it is also called "Yoghurt Festival". Because there are grand and warm Tibetan opera performances and grand Buddha exhibition ceremony during the festival, some people also call it "Tibetan Opera Festival" or "Buddha Exhibition Festival".

The celebration time of the Shoton Festival is usually in August of the solar calendar, which is also the peak season of Tibetan Tourism. Therefore, the Shoton Festival in Tibet is not only a carnival festival for Tibetan people, but also a grand ceremony for tourists at home and abroad to celebrate carnival together with Tibetans. Due to the large number of celebration activities with various forms and strong ornamental value during the festival, tourists all have a strong sense of  participating in the Shoton Festival. 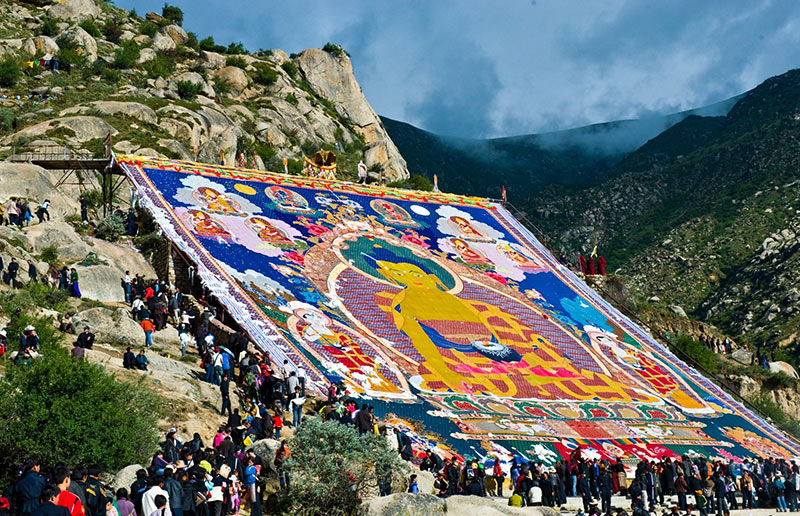 The origin of Shoton Festival

The Shoton Festival originated in the middle of the 11th century, when it was a purely religious activity.

According to folk tradition, there are more than 300 Buddhist commandments, and the most taboo is killing. Because in summer the weather becomes warmer, plants and trees grow, insects wake up and everything recovers, during this period, monks will inevitably step on and kill life when they go out, which is against the commandment of "not killing". Therefore, according to the commandments of the Gelug Sect, in the months from April to June of the Tibetan calendar, the lamas can only stay in the temple which is closed and practice quietly. It is called "Yale", which means "living in peace in summer". The ban can not be lifted until the end of June. On the lifting day of the ban, monks left the temple and went down the mountain. In order to reward the monks, the common people made yoghurt, held a picnic for them and performed Tibetan opera at the celebration.

Over time, this kind of celebration has become today's Shoton Festival.

The Celebration Time of Shoton Festival

The well-known ceremony of exhibiting Buddha in the Shoton Festival is held on June 30 of Tibetan calendar. Every year, the Buddha exhibition is held in the huge Buddha exhibition platform of Drepung Monastery. In Norbulingka Park Tibetan opera performances will be hold.

The Shoton Festival in 2020 starts on August 19, 2020 (June 30, Tibetan calendar). Tourists who want to experience the festival should not miss this opportunity. Tourists are suggested to arrive in Lhasa at the beginning of August 2020, adapt to the climate and weather in Lhasa in advance, and then feel the festival atmosphere of Shoton Festival.

The Celebration Activities of Shoton Festival

The traditional Shoton Festival starts with the exhibition of Buddha, Tibetan opera performances, and sightseeing in the park as the main content, as well as excellent yak racing and equestrian performances, etc.

As a prelude of the Shoton Festival, the exhibition of Buddha in Drepung Monastery is the most remarkable ceremony. On the hillside behind the Drepung Temple, under the first ray of dawn, accompanied by the solemn and solemn sound of the trumpet, a 500 square meter giant Sakyamuni statue woven with multicolored silk shows a peaceful face. Tens of thousands of believers and deeply infected tourists join hands to worship.

In order to stand at the best position to watch the Buddha exhibition, many Tibetans and even tourists will go to the Drepung Monastery in the early morning before dawn. Until dawn, the monks carry the wrapped giant Thangka and walk slowly upto the mountain. More and more Tibetans and tourists are flocking to the mountain behind the Drepung temple. Buddha statues usually unfold in the light of dawn, and the specific time is uncertain. If you want to watch the Buddha exhibition, you need to arrive at the Drepung temple as early as possible to stand at a favorable position.

Generally, the Thangka will not be displayed all day after it is launched. It will be rolled up again at noon after the crowd has dispersed. And the Thangka will be taken back in strips and carried to the Cuoqin Hall of Drepung temple. The ceremony of Buddha exhibition ended. 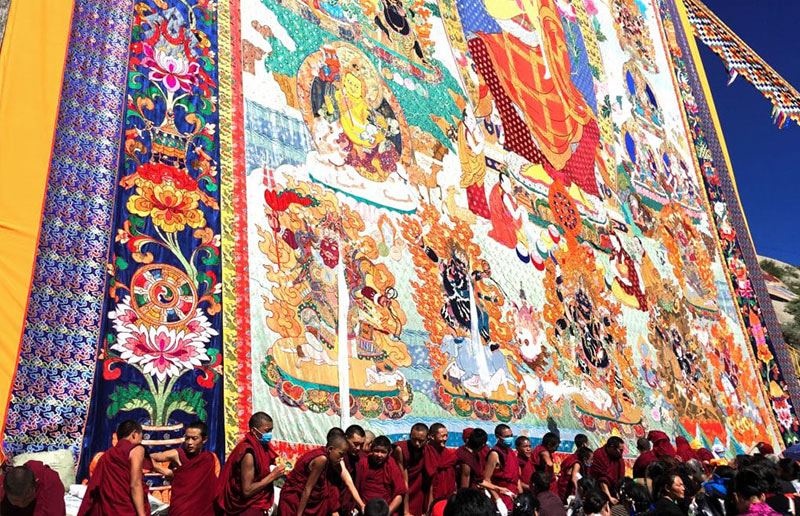 Tibetan opera performance is another important activity. From the second day of the Shoton Festival, in the Longwangtan park opposite the Nuobulingka and Potala Palace, the Tibetan Opera Troupe sang continuously from 11 a.m. to dusk every day. It is said that as the time is limited, it is the essence of the drama code. Otherwise, the opera will be holden for a few days, and the performer will enjoy himself.

The stories of Tibetan Opera include "King Nosafa" and "Princess Wencheng". After more than 600 years of practice, Tibetan Opera exudes a unique charm of natural beauty and rich connotation. 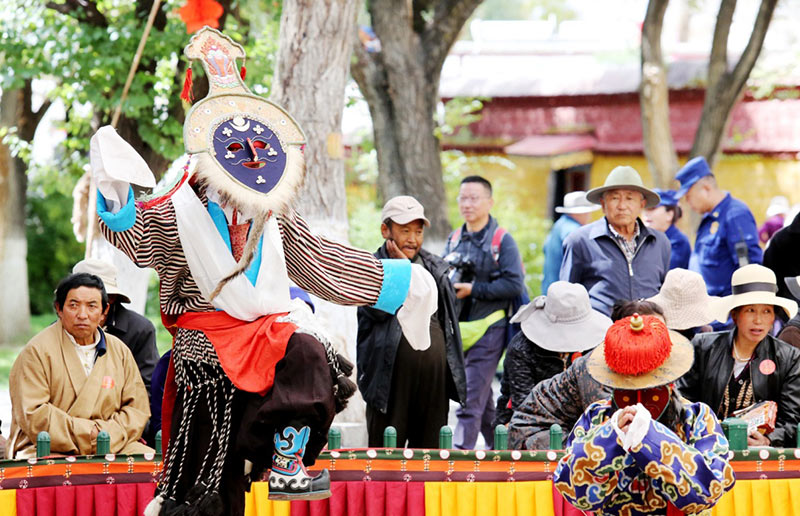 "Guolinka" refers to a leisure Tibetan activity. When the weather become warm and sunny, Tibetan people will set up tents and carpets in the wild, lay out highland barley wine and various snacks, drink and sing wildly, and enjoy the green mountains and clear water in the nature, which is called "guolinka".

Many Tibetans have prepared a day's food and drink in the early morning, then go to Norbulinka to find a piece of land and gather in a circle and have a good day. Many people are listening to Tibetan opera, shaking the scripture cylinder in their hands or twisting Buddhist beads. This is the lively form of Tibetan festival. 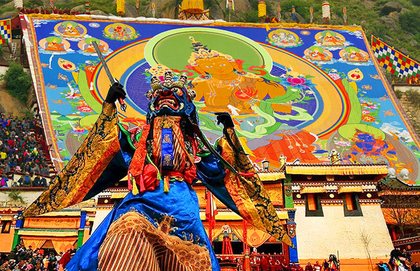